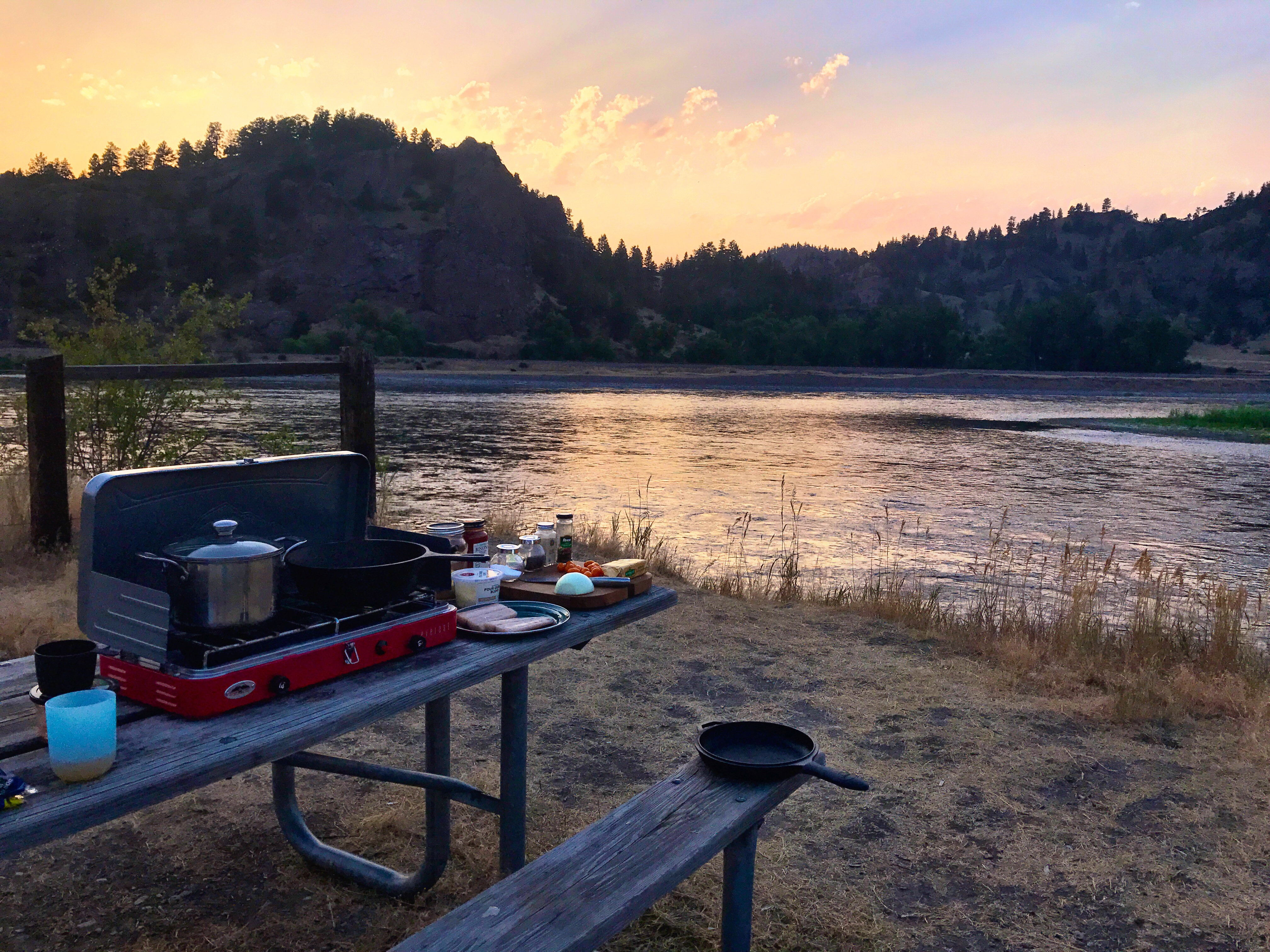 A Van for All Seasons – Summer

This is the second of two posts on the seasonal lessons we’ve learned from living in our van for nearly a year. For Part 1: Winter, click here.

Unsurprisingly, it is pretty delightful to live within the outdoors once warm weather arrives, or in our case, once we decided to drive far enough south to find summer in late March. Therefore, this post contains no reflections on hardship or great revelations, but perhaps you will pick-up on a few tips to better adapt your vehicle for warm weather.

How to Build a Surfboard Rack – DIY:

The start of our warm weather adventures began in SoCal on our way to Baja, when we switched gears from just skiing to surfing, mountain biking and some hopeful climbing.  To accommodate for these adjustments in recreation, we traded half of our ski quiver for fly fishing gear and Remy installed a surf rack on the outside of the van.  We opted for a side rack instead of a roof mount because 1) our roof is covered in four solar panels and covering these in surfboards would negate their usefulness 2) our roof is very tall and we do not have a ladder. Loading and unloading surfboards from the roof without said ladder be a major pain.

To make the surf rack, Remy first installed a strip of L-track to the van’s driver-side exterior wall, then added L-track along the edge of the roof and bolted a D-ring into the rear wheel well.   He then purchased two giant U-shaped hangers, which have welded ends that are already designed to lock into L-track. We fitted the hangers with pipe insulation, wrapped them with tape and then slid them into the L track on the van.  Ratchet straps connected to the D-ring & a ring on the roof L-track held the surf boards firmly against the side of the van and extra-long cable bike locks woven around the boards and hangers offered a touch of visual theft deterrence.

Wave scouting while using the rack to dry our floor mats. We got stuck in the sand for the 57th time and had to put the mats down for traction to extract ourselves.

With this set-up we transported two longboards (and a shortboard in the ‘garage’) approximately 2,000 miles without incident.  But carrying the boards on the side as opposed to the roof did have a downside. While the surf rack did not physically extend beyond the driver side mirror, it definitely felt like it added to our width and it created a small blind spot. As a result, we held our breath and said silent prayers for safe passing every time we squeezed past a semi truck on a particularly tight stretch of pavement on Baja’s highway 1.

In Baja we were reintroduced to a vexation of summer and open doors; bugs, in particular biting flies. Our campsite at Punta San Carlos was extremely windy and it seemed that even the flies sought refuge from the gusts by risking their lives to hang out inside. We became very adapt at nailing flies with the snap of a kitchen towel, but the slowly piling up corpses began to weigh on our conscience. Clearly we needed a screen door.

There are ready to install screens available for purchase online, already cut to fit various vehicle makes and models, though these will set you back more than $200 with shipping. Alternately, you can make one yourself that works nearly as well for a fraction of the cost.  All you need is durable but fine mesh screening that is larger than the door opening that you wish to conceal, Gorilla Tape, snaps, scissors and an apparatus that allows the seam between the door opening to close and open easily. Snaps, magnets and zippers all work.

Step 1: Cut screen to fit door and then into halves.
Step 2: Trim all raw edges with Gorilla Tape.
Step 3: Attach trimmed edges to interior of van door. (We used snaps for this, spaced at 6 inch intervals.)
Step 4: Fasten “closures” to the ends of the screen that serve as the opening.
Step 5: Marvel at your creation and let your long hair ruffle in the breeze, as seen above.

If the only creatures who need to access your van have opposable thumbs, then a zipper might provide the most bug-proof closure. In our case, however, we wanted Max to have access to the van and the outdoors without requiring our assistance and opted to use flat magnetic stripping. Remy cut the stripping into squares and sewed these to either side of the opening at intervals, which you can see in the photo.

A quick and humorous anecdote. While Max knows that he can get through this particular screen door, a lifetime of enthusiastically bounding towards seemingly open doors only to be rejected mid-leap by an invisible sliding screen has made him extremely wary. To enter the van through the magnetic screen, he first paces nervously, pushes at the screen with his nose and silently begs for assistance with his eyes.  When assistance is not given, he reluctantly backs up for a running start. Courage gathered, he scrunches his eyes shut and leaps towards the flimsy screen closure, head turned away and shoulder dropped like a running back trying to break through coverage.  As he’s not looking at his target, sometimes he overshoots the entrance and nearly hits the cabinets; sometimes he shorts himself and smacks into the step instead, bouncing backwards.  Always intelligent, often aloof, frequently manipulative and with the unnerving habit of initiating and then maintaining eye contact, Max’s struggles with this particular obstacle are hilarious to observe.

A less dignified moment for Max – trapped by a shopping bag.

An Awning?  Many staged vanlife shots conjure a similar scene; van buds parked door to door, awnings staked out and nearly touching, strings of white lights pulled from somewhere adding just the right touch of  magic bohemian glow while someone plays the guitar. Of course we wanted in on that dream  – minus the Christmas lights.  But awnings are expensive and we were uncertain if we would use it enough to justify the cost.

We settled on this ARB model. At roughly $300, this brand is about $500 less expensive than the cheapest Fiamma which seems to be favored by expensive outfitting companies and older folks with lots of obvious disposable income.

The awning is up, though not exactly in use.

Overall, we’re pleased with this decision. With two people, the ARB model takes about 7 minutes to unroll and set up and about 10 minutes to put away.  (It’s a much longer and more complicated process by yourself, particularly for the vertically challenged, but still doable.) We’ve found, however, that we generally don’t stay in one place long enough to make use of it regularly.  But it provides respite from bright sun and light rain and gives us a little more living space when we stay put and spread out for a few days.

Cooking Alfresco –  We designed our kitchen to enable outdoor cooking.  When indoors, the Camp Chef stove is hooked up to a 1 gallon refillable propane tank beneath the sink, but can also be moved outdoors to function as intended.   A collapsible aluminum table from REI makes a good cooking & prep surface if a picnic table isn’t available.  And while baking on a camp stove is a little challenging, we have a Lodge Cast Iron Skillet Combo

set that theoretically can double as a dutch oven over a campfire.

While I thought that I would frequently want to move my kitchen outdoors, in actuality I don’t cook outside all that much.  In addition to moving around a lot and frequently not arriving at our campsite for the evening until fairly late, my tiny kitchen, designed and built just for me, has everything I need within reach.  Unless we are with friends or the weather/sunset/setting is just too stunning to step away from, relocating all of those kitchen items outside is often more of a pain than it is worth. Plus, swatting bugs out of the skillet while simultaneously stirring and mincing gets old. If we were building a van today, I would 100% want a Dometic Oven Range combo and happily commit fully to doing all cooking indoors and trade less usable counter space for being able to bake and broil and roast things. 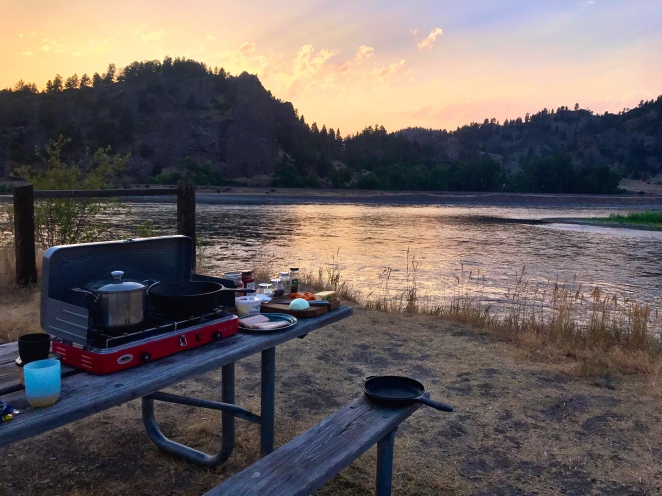 A failed polenta dish in progress along the Missouri River outside Craig, MT. The light show was too spectacular to miss.

This really has nothing to do with summer, but we’ve found that Camco Leveling Blocks

s have been the most useful purchases that we’ve made since we embarked on our trip. Remy, an engineer through and through, cares far more than I do about getting the van as level as possible before parking it for the night.  In fact, I believe that he secretly relishes the process of backing up, inching forward and essentially 8-point turning around in tiny circles (whale ballet as we’ve taken to calling it) for up to twenty minutes to achieve the slightest reduction in pitch and tilt.

This ritual drove me insane and I would frequently hand him the keys and depart the van to read or do yoga while he parked.  But the blocks and levels have helped reduce this production to about ten minutes max.

Kafka on the Shore

: I regret that it has taken me until 33 to discover Murakami.  The blend of sci-fi, magical realism and complete lack of explanation found in this book is marvelous. Plus it would be excellent to speak with cats. I’m sure they know so much.

I haven’t discovered any obscure and awesome podcasts lately, but I’ve been peppering our longer stretches of driving with short bits from the She Explores Podcast. In particular, I recommend Episode 22, featuring Rahawa Haile, who solo-hiked the Appalachian Trail while reading (and leaving behind) books by black authors. Wandering through the open spaces of the country, one sees so few people of color and I find myself frequently reflecting on the extra layers of armor that a black woman has to don to begin to attempt to claim that space for her own, especially in this moment.

One thought on “A Van for All Seasons – Summer”